( In the name of Allah, Allah is the Greatest ) 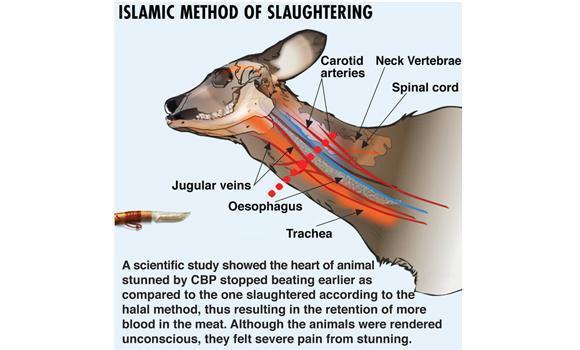 Dhabīḥah (or zabiha, Arabic: ذَبِيْحَة‎ ) is, in Islamic law, the prescribed method of ritual slaughter of all lawful halal animals (goats, sheep, cows, chicken) excluding locusts, fish, and most sea-life. Unlawful animals like pigs, dog, kangaroo, boar, etc. are not allowed to be slaughtered or zabihah. This method of slaughtering lawful animals has several conditions to be fulfilled. The butcher must be Muslim, the name of God or “In the name of God” (Bismillah) must be called by the butcher upon slaughter of each halal animal separately, and it should consist of a swift, deep incision with a very sharp knife on the throat, cutting the wind pipe, jugular veins and carotid arteries of both sides but leaving the spinal cord intact.

According to the Islamic law, halal ritual slaughter is an act of adoration. It is performed manually.

It is to be performed for Allah (Subhanahu wa Ta’ala), the One and Only God, only for Him and in a manner that He approved and allowed, and with the intention of ensuring proper nutrition.

Offertory is the worship of the One and Only God, therefore it cannot be replaced by a machine with a sharp mechanical knife. Ritual slaughter must be performed properly. In order to kill small animals (sheep, poultry and cattle), the neck should be cut below the larynx: pharynx, oesophagus and large blood vessels, with one move. The larynx must stay close to the head.

Ritual slaughter is perfect if it meets the following conditions:

– An animal must be trapped in an appropriate trap device.
– A box or a cage must be easy to use and open without noise to prevent stress of the animal.
– In order to avoid stress, pain and wing fracture, birds can also be trapped in an appropriate device. Poultry can be hanged by the legs on a slaughter line.
– Knives used for slaughter must be sharp, have rigid blades and be resistant to corrosion, so as to ensure quick and immediate death of an animal. They cannot be used for any other purposes than ritual slaughter.
– Knives must be sharpened before every slaughter to prevent pain.
– The room where slaughter takes place must be equipped with a sufficient number of knives and                   sharpening machines.

– All animals intended for slaughter must undergo examination (ante mortem) performed by veterinary     services.
– Ill animals, in the state of clinical death, bitten by a wild animal, afflicted by diseases contagious for people (zoonosis) and with high temperature are not killed, because they are not halal, i.e. not healthy.
– Tired and stressed animals after the transport must rest before the slaughter.
– In order to avoid visual stress in animals before ritual slaughter, one should avoid situations in which           animals could see a knife or a death of other animals.
– Land animals, accepted for consumption, killed by: suffocation, stunning by hitting in the head, electric     shock, immersion in hot water or gassing that is not allowed (Arab. haram) are not accepted for                         consumption.
– Brutal treatment of these animals is unacceptable. Proper treatment of animals is the chief rule.

Cattle slaughterhouses in Poland are equipped with a holding system used to immobilize an animal before ritual slaughter.

a) Hygiene before ritual slaughter

Ritual slaughterers must take care of personal hygiene and wear appropriate clothing that meets sanitary regulations. Food hygiene in Islam is based on the fact that animals bleed quickly, without stunning and stress, and the meat remains clean. Blood is a habitat of diseases and a threat to human health.

b) The conditions of animal slaughter legal validity according to the Islamic law:

An animal must be kept in a trap appropriate for a given species. It is recommended that a ritual slaughterer directs an animal towards quibla (the direction of Mecca). A ritual slaughterer must be in the state of cleanliness (tahir: ghusl). He should preferably perform ablution (wudhu). A ritual slaughterer, in order to express his intention to sacrifice, must pronounce the name of God and say: “Bismillah, Allah Akbar” (In the name of Allah, Allah is the Greatest). If this is forgotten unintentionally – it does not have any consequences. If this is omitted intentionally – the meat is not accepted for consumption (it is treated as non-halal).

Killing animals in Islam is a method of ritual slaughter of edible land animals, practised by means of a deep and quick incision of throat with a sharp knife, in order to cut the carotid quickly and to leave the spinal cord. The purpose of this technique is to easily remove blood from an animal’s body in a way to leave the meat clean.

Animals are killed with one or two moves with a sharp knife (there and back). A tool used for slaughter must be sharp to prevent additional pain and long suffering. The cut should not be made in the presence of another animal, as the sight of slaughter evokes unnecessary stress and anxiety. A knife should not be sharpened in front of an animal.

Animals are killed through the simultaneous cut of the trachea under the larynx and on both sides of carotid arteries and jugular veins. One should wait several minutes after the slaughter to allow the leakage of blood from the cut carotid. The animal stays in the trap until it loses blood to death. After it stops fighting, it falls on the floor and is immediately hanged to lose all the blood. The suffering experienced by an animal is limited to the knife going through the skin. Contractions of limbs after slaughter and bleeding do not signify pain. It is a natural nervous reflex due to the lack of blood supply and brain oxygenation. These contractions help to expel the maximum amount of blood from the body.

It is not allowed to make any cuts on an animal (e.g. cutting legs or head) before its complete death (the last gleam of the retina is the sign of death).

If carotid arteries are blocked (a physiological reaction of the narrowing of vessels), the ritual slaughterer makes an incision in the neck tip in order to release blood. One cannot start the process of cutting up or break the spine before the complete descent of its soul.

Once the skin is removed, gutting should be made immediately and quickly in order to prevent intestinal bacteria from penetrating into deep tissues. Meat in containers should not have a direct contact with the ground. Staff responsible for supervision and sanitary inspection is obliged to carry out regular general hygiene inspections and microbiological inspections of halal products and used devices, i.e. the “contact points”. The facility must inform about the planned inspection, its nature, frequency and the results of microbiological controls.

Summary of conditions for halal slaughter

Islamic law requires that animals intended for human consumption be slain in a certain manner.

The conditions for halal slaughter can be summarized as follows:

– The animal to be slaughtered must be from the categories that are permitted for Muslims to eat.
– The animal must be alive at the time of slaughter.
– No electric shock, bullet or any other means should be used before slaughtering. Using any such method may lead to the death of the animal before it is cut. Islam prohibits Muslims from eating any meat coming     from an animal that is dead before slaughter. Muslims are also advised to avoid eating anything doubtful.
– The animal must be slaughtered by the use of a sharp knife. The knife must not kill due to its weight. If it kills due to the impact the meat may not be permissible.

– The windpipe (throat), food-tract (oesophagus) and the two jugular veins must be cut.

Customary and desirable practices when slaughtering

Permanent link to this article: http://briansoft.home.pl/autoinstalator/wordpress/?page_id=2441⟨=en